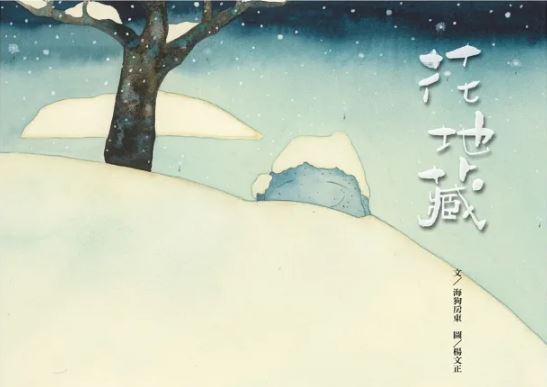 Blossoms of Flowers in the Darkness, Rebirth of a Rock

A story about the Elegance of Silence and the Power of Calm. A rock on the mountain top always claims that it’s the number one of the world. An unexpected earthquake changed its destiny from
the moment it dropped down from the top to river. One day, an old stonemason discovered it and found it an extraordinary material of the kind and decided to carve on with it. The rock dreamed
day after day that it may become the real masterpiece, but all of a sudden, the old stonemason disappeared!

The authored described that he was once in the downsides of life, and by chance the image of Kshitigarbha with Blossoms just crossed his mind. He started to write down the story and in creation of the work, he found the value of life again. For the illustrator, when he first read about the story, he was touched by the tenderness of the story, so he expressed the story with gentle and soft tone in the illustrations. The combination of the fascinating story with the softness of the illustrations will inspire the power inside of you. When you close your eyes, the story will calm you down and light you up from the lost and dull of life.

Higo Wu was born in Taipei, Taiwan. Before becoming an author of picture books, he worked as a book reviewer. Wu enjoys telling stories for children and adults. Living all his life on a multicultural island, he believes no one is an island because stories, ancient or modern, will connect us all. He published a book of introducing picture books to parents and he is the author of several picture books, such as Blossoms of Kshitigarbha, Peace, Will You Play with Me?, and Mommy is a Cloud...etc. One of his works, The Song of Little Stone, has been published in English.